Despite its great popularity in the Antiquity and Middle Ages and its botanical name, Setaria Italica, foxtail millet is nearly forgotten in Italy. The most common way to cook it until the Renaissance, described in medical and culinary books, was preparing a thick polenta with whole grains or flour, usually with milk and fats. In this case, lard, but later sources describe also butter and cheese.
In the Middle Ages, paniça (polenta made with foxtail millet, in Italian panico) was traditionally paired with roast meat, in particular spit-roasted goose. You can prepare it, as the medieval author writes, with both foxtail and common millet, but if you find it, we suggest using foxtail millet: its flavor is incredible, in particular, cooked this way.
There are many sources for this recipe. We chose the manuscript conventionally called Anonimo Meridionale (14th century) for the polenta, the Opusculum de Saporibus (booklet about the sauces) by Maino de Mainieri (14th century) for the sauce (unfortunately missing in the other manuscript), while for the preparation of the goose, we followed the directions suggested by the anonymous author of the Liber de Coquina (13th century).
This recipe, complex and delicious, seemed to us the perfect way to celebrate Christmas with the typical medieval flavors: a great roast, an unusual and delicious polenta, and a pepper-based sauce very popular in the Middle Ages, called peverata in Italian and piperata in Latin.
For your medieval Christmas menu, we suggest pairing this plate with other excellent medieval courses: ravioli, lasagna, chicken pie, roast lamb with green sauce, walnut bread, and almond cream.
Below, you find the video of the recipe (with English and Italian captions), the method, and the original texts with our translation into English.

The preparation of the goose
Tie the legs and wings of the goose; then fasten it to the spit. Cook it with open fire, placing the goose beside the fire. Turn often to cook the meat at low heat. Place a pan under the goose to collect the drippings of the melted fat, necessary to prepare the sauce and the polenta. With this cooking technique, our goose needed about six hours, but remember that the time can change considerably if you use a different method (for example, with fire on both sides).
Usually, the roasts are prepared with a good amount of fats. In this case the source, the Liber de Coquina, suggests spit-roasting the goose without additional fats, sprinkling salt at the end of the cooking. 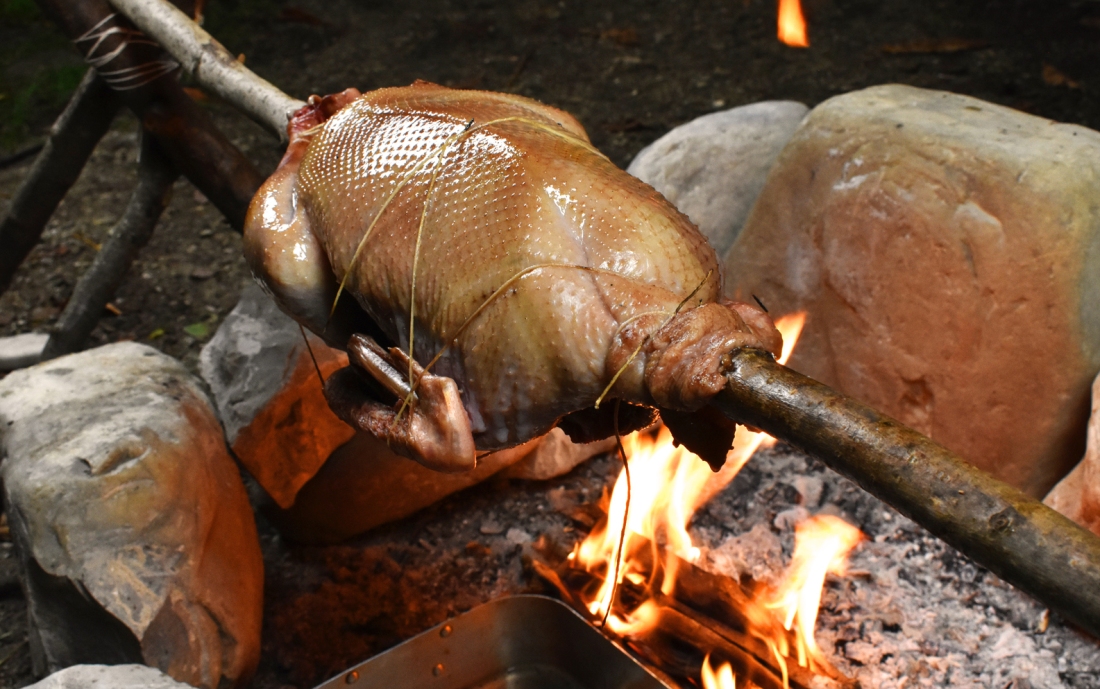 The black-pepper sauce
Roast a piece of goose liver and a slice of bread. The author specifies that the bread has to be well blackened to obtain a black sauce. We suggest paying attention not to burn it excessively.
Soak the bread in vinegar, then grind in the mortar a few cloves, a good amount of black pepper, and a pinch of salt. Add the liver and the bread in the mortar pounding all the ingredients together, diluting with a little goose drippings and a good amount of verjuice. Cook the sauce until it thickens.

Note about the ingredients
Bread and liver are commonly used as thickeners during the Middle Ages. We suggest using just a piece of goose liver, to prevent its flavor from overpowering the sauce.
The author suggests using agresta, which means unripe grapes, frequently used as acidifiers in medieval cuisine, in this case, to balance the fats. The same author suggests, in other passages of his booklet, substituting them with vinegar when they are not in season. Other ingredients used commonly instead of grapes are verjuice, a wine prepared with unripe grapes used just for cooking, as well as lemon or sour-orange juice.
There are three recipes of piperata in the Opusculum de Saporibus, and many others in different medieval cookbooks. In this one, suited specifically for waterbirds, goose, and duck, the author does not specify which spices we have to use. We chose obviously pepper and added cloves, suggested for another recipe.

Translation
Black piperata is the appropriate sauce for roasted duck, goose, and other waterbirds. Pound in the mortar bread, roasted until it blackens and then soaked in vinegar, and roasted liver, diluting with the fats of the roast meat and unripe grapes. Boil all together until it thickens.

The foxtail millet polenta
Overcook the foxtail millet with goat milk, a little goose drippings, and two pinches of sea salt until it is well thickened, stirring frequently. Serve the polenta with the goose, coated with peverata sauce. 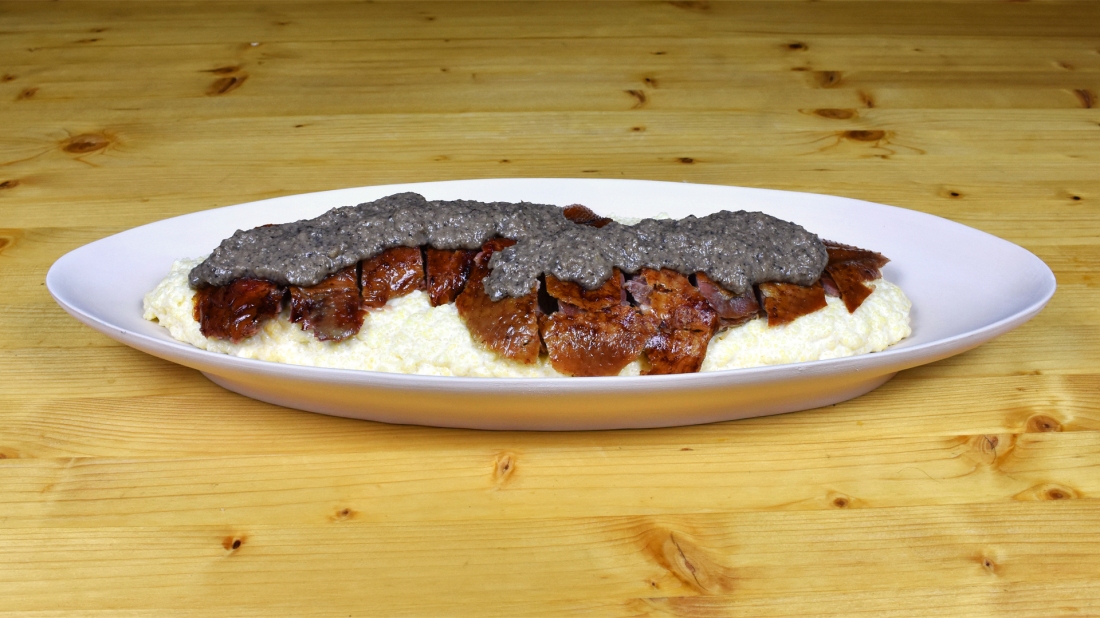 Note about the ingredients and method
We used 200 grams of foxtail millet with 1,5 liters of goat milk, but the quantity of milk can change considerably if you cook the polenta at a higher heat or cover with the lid. The author suggests using goat or sheep milk, but you will obtain a delicious outcome also with cow milk. We cooked the polenta for about 40 minutes.
The source suggests using lard; we chose instead the drippings of the goose, suggested by Maino de Maineri to prepare the sauce.

Translation
We see now how to prepare a paniça with roast goose or another roast meat. Take much decorticated common millet or foxtail millet, then wash it with warm water to whiten well its color. Boil it in a pan with fresh sheep or goat milk. When it is almost cooked, add white melted lard. Add a good amount of lard to make the foxtail millet well fat, knowing that foxtail millet is too hot [the author refers to medieval medicine: it is too hot in complexion] and turns very fat, but do not exaggerate with the quantity in a way that when it is cooked it smells excessively of lard. [The part about how to prepare the sauce is missing, except for a sentence in which the author writes that it has to be thick].
When you serve the paniça, it has to be well thick. Serve covered with the peverata you have prepared in this way [the text refers to the missing part], so called in Tuscan vernacular among the court of Rome.