One of the main characteristics of ancient Roman cuisine is the great use of Mediterranean spices and aromatic herbs. Fennel, cumin, coriander, celery, lovage, mustard seeds appear frequently in the recipes, as well as mint, thyme, savory, rue, oregano, and many others. Eastern spices were imported and well known; yet, their culinary use was limited. Except for pepper (all the three kinds of pepper were at disposal of the Roman cook: long, white, and black), present in a huge part of De Re Coquinaria‘s recipes, usually eastern spices were used mainly as perfumes, as Pliny writes. This main function does not contradict the habit to add spices as seasonings for garum and wine, being the fragrance one of the most important aspect for these two fundamental preparations.
Today we present a recipe with many spices and spring aromatic herbs, perfect for this season: chicken stewed in its sauce, selected from De Re Coquinaria, the cookbook conventionally attributed to Apicius. If you are interested in other poultry recipes from ancient Rome, we suggest trying the pullum Frontonianum (roast chicken) or the pullum Numidicum (guinea fowl).
Below, you find the original text with our translation, a note about the ingredients and method, and the video of the recipe with captions in English and Italian. Enjoy! 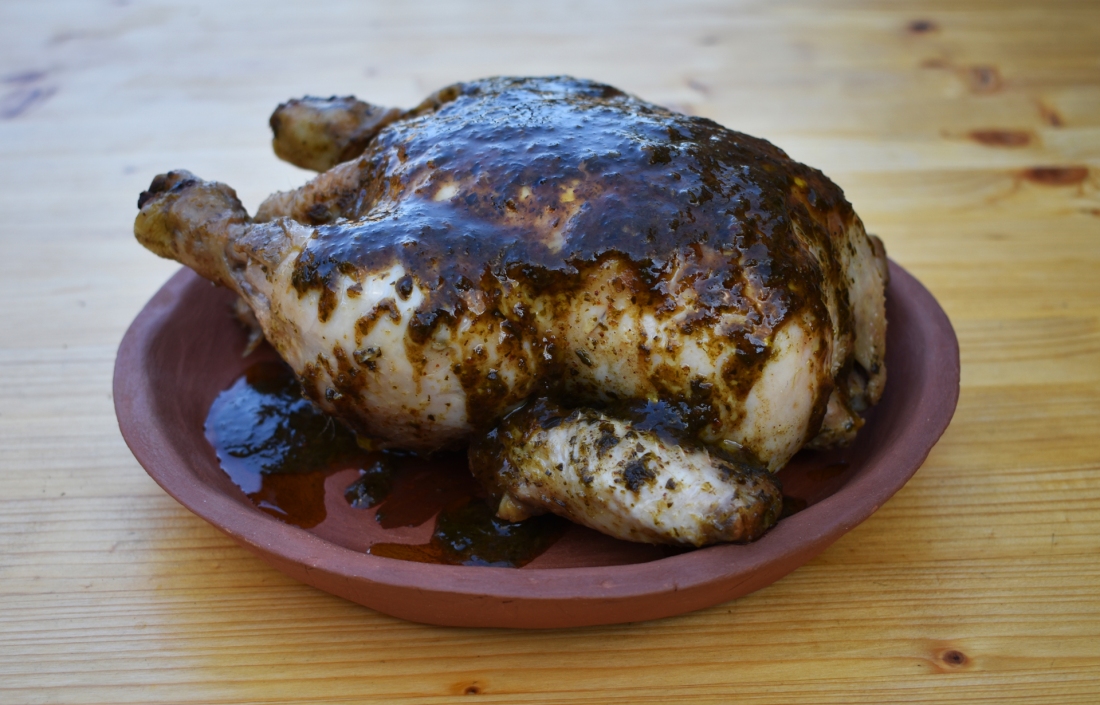 Method
Grind in the mortar the long pepper, cumin, and fennel seeds, then mince the aromatic herbs. Add in the mortar the herbs and one date. Grate a bit of asafoetida and pound all the ingredients together. Mix with a little honey, white wine vinegar, garum, and olive oil.
Pour the sauce in a pan diluting with a bit of water. As soon as it starts to boil, add the chicken. Turn often the meat basting it with the sauce. When the chicken is cooked, serve it coated with the sauce. Our stew was ready in one hour and a half, but the cooking time may change depending on the size of the chicken.

Note about the method and ingredients
De Re Coquinaria offers a few variants of this recipe, for example, simmering the chicken in water, then discard the water, cool it down, and serve covered with the sauce.
Rue, mint, and thyme are present in a large part of ancient Roman recipes. If you do not have them, you can use other fresh herbs instead, for example parsley, oregano, cilantro, or savory.
The author does not specify which kind of pepper we have to use for this recipe. We suggest choosing black or long pepper.
Asafoetida, called laser Parthicum by ancient Romans, was the less costly and prized variety of silphium, described in detail by many ancient authors, in particular Dioscorides and Theophrastus. Laser Cyrenaicum instead, the better quality of silphium, seems to have disappeared since the 1st century of the common era, according to Pliny and Strabo’s testimony.
The recipe calls for the root of laser, which we substituted with the resin.
Garum was an ancient Mediterranean fish sauce, produced in the same way as modern-day South-East Asian fish sauces, which are an excellent substitute for garum. If you prefer, you can use two pinches of salt instead.