In the medieval Italian cookbooks, torta is usually more similar to a kind of stuffed pasta than a modern-day pie. The authors skip the description of how to make the crusts, given clearly for granted, but we find some recipes in Renaissance sources. We find out that the dough for the torta is the same kind as lasagna, as well as the one prepared to make dumplings (ravioli or tortelli, which means little torte). The basic recipe for torta crust is simple: mix warm water with white wheat flour, then roll a thin sheet. Other recipes may include rose water, eggs, and saffron to color the dough. There is another kind of pie, called pastello from Latin or coppo from Greek, which are basically the same: thicker crusts, sometimes precooked before being filled, made with flour, water, cooking fats (usually, olive oil, lard, or, in the late Middle Ages and Renaissance, butter), rose water, saffron, not necessarily using all these ingredients. We made a prawn pastello and a chicken torta a few months ago. This week, we prepared an apple pie following a recipe from the Registrum Coquine, a beautiful cookbook written at the beginning of the 15th century by a German cook, Johannes Bockenheim, who worked at the court of Pope Martin V. As in the case of an excellent beef stew that we made a few months ago, the author suggests this recipe for peasants. Below, you will find the original Latin text with our translation, a note about the ingredients, and the video of the recipe with subtitles in English and Italian. Enjoy!

If you like our contents, please support us on Patreon, where you find translations of historical sources and further articles.
Our new book, “Ancient Roman Cooking. Ingredients, Recipes, Sources“, is available on Amazon (e-book and paper edition). Here you find the Italian edition. 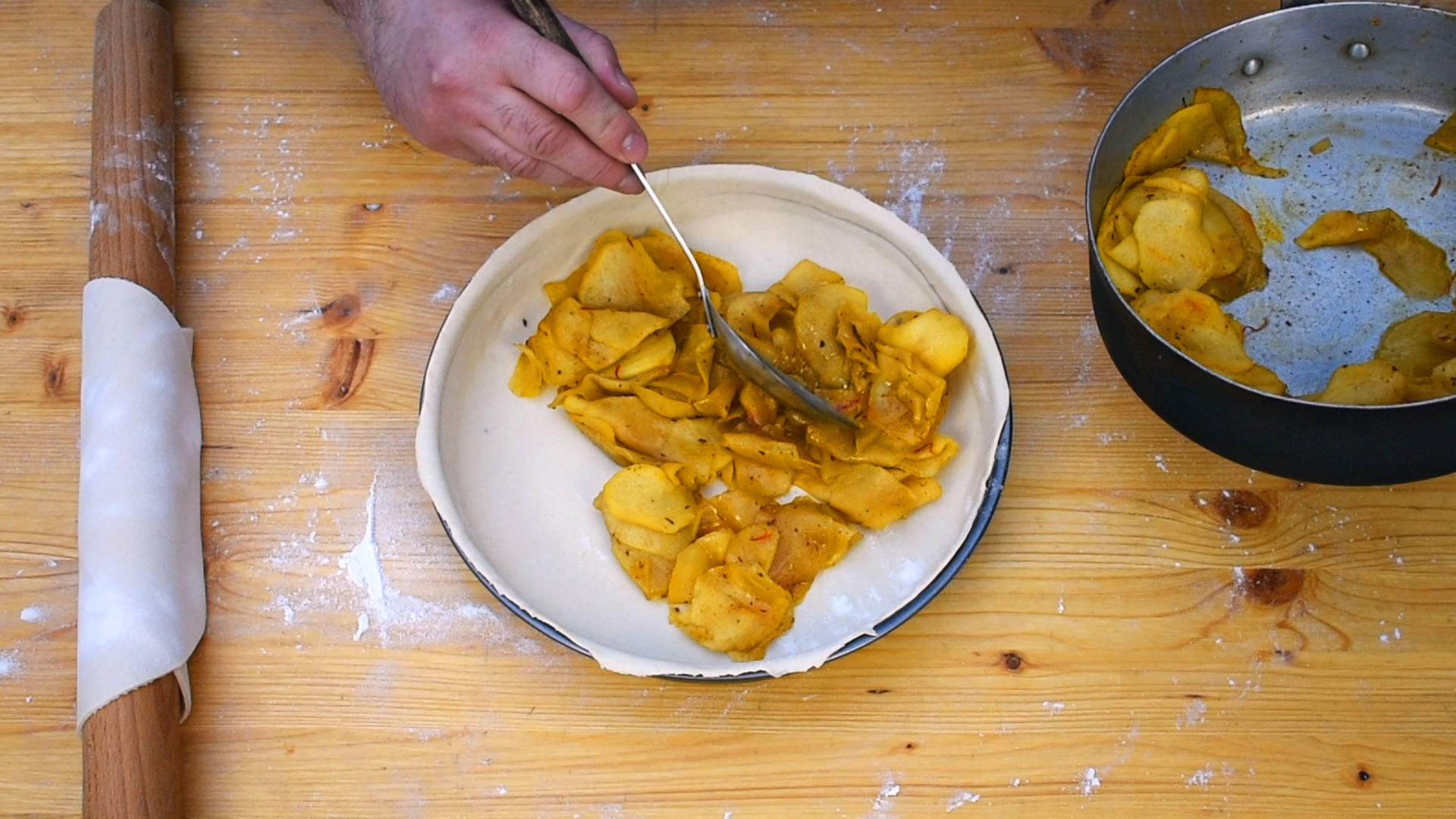 Method Grind in the mortar cloves, nutmeg, and cinnamon. Steep in warm water the saffron. Peel and slice the apples finely. Warm the olive oil in a pan and add the slices of apple, spices, and saffron, cooking them for a short time. It is important that the apples do not break. Remove the filling from the fire and prepare the crusts. Knead the flour with warm water and two pinches of sea salt and work well until you obtain a homogeneous dough, not too hard. Divide the dough into two parts, one bigger and the other smaller. Grease the pie pan with olive oil. Roll the bigger piece and lay it carefully on your pie pan, cutting the excess part. Roll the smaller piece the same size of the pie pan. Fill the crust with the apples and lay the upper crust, sealing the pie. Cook the pie in the oven for about 20 minutes. The cooking time changes depending on how much your crusts are thin and soft. When it is done, drizzle with honey and let it cool down before serving. 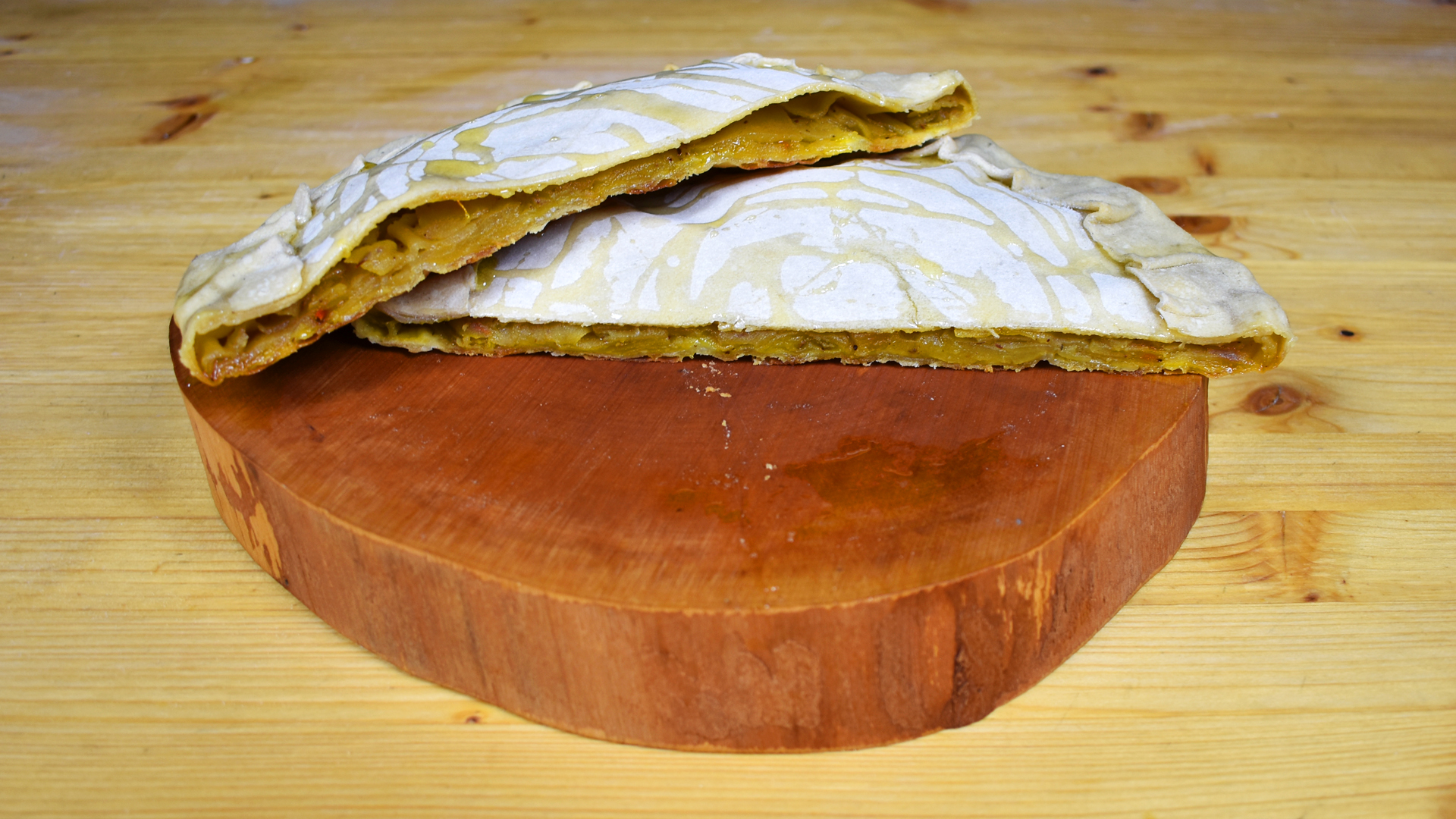 Note about the ingredients The only mandatory spice is saffron, one of the most common in the medieval cookbooks. It was produced in Italy since the Antiquity, but also imported to meet the high demand. It appears even in a few recipes meant for common people, for example in the manuscript called Anonimo Toscano and in this cookbook. The author specifies to use sweet spices: we chose cloves, nutmeg, and cinnamon, listed among the sweet spices in the medieval manuscripts. We suggest do not exceed with honey to prevent the pie from becoming too sweet. The author recommends using different kinds of apples: the finality is to obtain a filling with a complex flavor. Pietro de Crescenzi describes the many varieties of this fruit: red, yellow or green; sweet or sour; big or small. Choose among the kinds you prefer. The apples must be sliced finely: as a host, the author writes. This pie is meant for the lean days, which means the days of religious fast. This is the reason why the author uses olive oil. If you prefer a pie for the fat days, you can substitute it with lard or butter.

Translation To make an apple pie for peasants. Take apples with different flavors, peel, and slice them in the middle as hosts. Place them in a thin crust, and season them with saffron and other sweet spices. Fry them in olive oil, and pour over [the pie] honey for peasants.