Blancmange becomes a popular food starting from the Middle Ages. The main ingredients are characterized by their white color: rice (flour or overcooked grains), milk, sugar, almonds, lardo, and chicken or fish. Cereals overcooked, sometimes in milk, and reduced to a cream, however, are present yet in ancient Roman cuisine. We find similar preparations, for example, in Cato’s De Agri Cultura, as variations of pultes, in Apicius (but here the rice is overcooked in water and served with meatballs), and Anthimus, a Byzantine physician of the 6th century. The addition of sugar is purely medieval. In the medical handbooks, first of all the Tacuinum Sanitatis, we find out that the best way to remove any kind of harm from rice is cooking it with oil, milk, and sugar, especially during the winter. Medieval authors, however, usually prefer lardo (cured pork fatback) to oil, whose use is mainly reserved for the lean days. There are also recipes of blancmange with fish, as we mentioned before: versions for the days of fast with almond milk, fish, and olive oil appear in many manuscripts.
The main feature of all these recipes is the white color of the dish. The color of the food is a fundamental concept in medieval cuisine: we find plates colored in many ways, for example green, yellow, black, and purple. White food was considered particularly healthy and nutritious by cooks and physicians.
The recipe we are preparing today is selected from the Liber de Coquina, a 13th-century anonymous manuscript written in Latin. As you will see from the original text (you find it below with our translation into English), this manuscript presents two versions of cibus albus (white food), the first with rice flour and the latter with whole grains. Enjoy!

Method
Boil the chicken breast and shred it finely.
Mince the lardo and let it melt in a pan, then stir-fry the almonds.
Pound the white cane sugar in the mortar and mince the peeled ginger.
Cook the rice in the goat milk for about 30 minutes, then add the shredded chicken breast, two pinches of sugar, and the melted lardo until the rice is overcooked and reduced for the most part to a cream with a thick consistency.
Plate the rice and chicken adding the fried almonds and sprinkling with a pinch of sugar and the minced ginger.

Note about the ingredients
Sugar is frequently used in medieval cuisine, habitually as a spice more than a sweetener. In this case, as the author specifies, it is important to use white sugar, the most common on the table of nobles and considered more healthy by medieval physicians. Brown sugar was cheaper and mainly used by common people, as we can see in this leek soup recommended for peasants.
Ginger, known and used since the Antiquity, was available both fresh and dry. For a better outcome of the recipe, we suggest using it fresh.
The medieval author writes to shred the chicken breast finely, not to mince it.
Lardo is cured pork fatback, the most common cooking fat in the Middle Ages, still used today in many Italian regions. 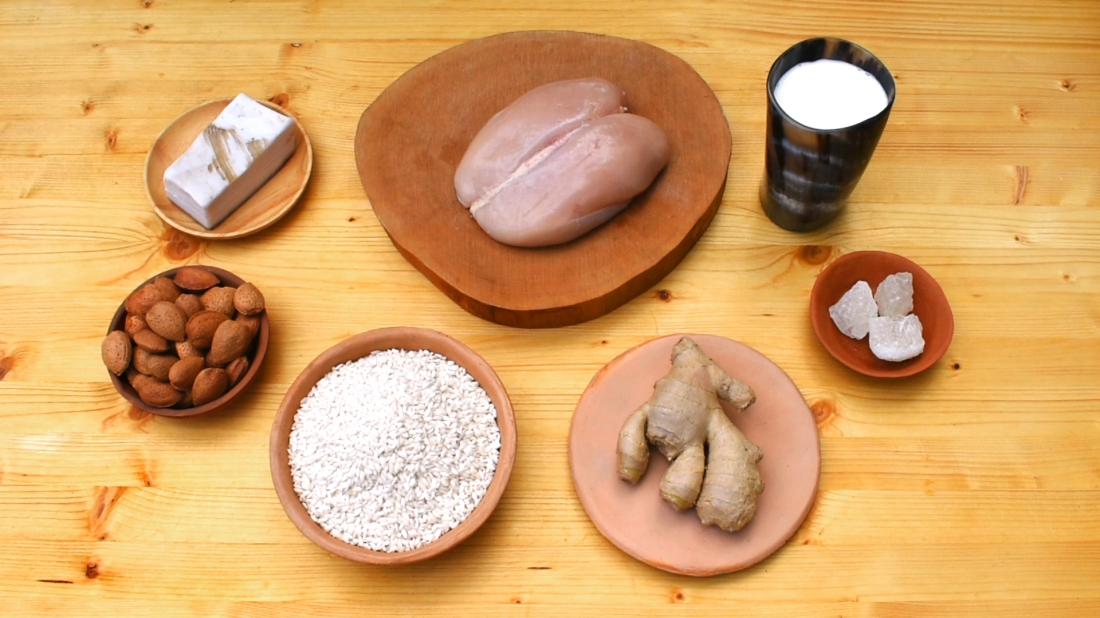 Translation
About cibus albus: to make cibus albus, take boiled chicken breasts and shred them more finely that you can. Then, wash rice and mill it, then sift the flour through a cloth. Following, diluted this rice flour with goat or almond milk. Cook them in a well-cleaned pot. When they start to boil, add the shredded chicken breast with white sugar and lardo. Remove the smoke and boil moderately at low heat. The rice has to be as thick as usual. Serve with ground sugar and fried lardo.
You can also prepare it with whole grains of rice and goat milk, as it is common on the other side of Alps [in this case, the author means France]. Serve with fried almonds, sugar, and white undamaged ginger. This plate is called in Gaulish blanc mangier, which means white food.