Today we prepare a delicious ancient Roman dish, made with fresh fava beans and spices. We selected this recipe from the cookbook attributed to Marcus Gavius Apicius, the most famous cook of the Antiquity.
Fava beans prepared with a sauce made with ginger – a spice widely used in ancient Rome – pepper, lovage, and eggs are a perfect springtime dish, with a flavor well balanced between sweetness, saltiness, and acidity. The author recommends this recipe for both peas and fava beans.
You can prepare either fresh or dried legumes, preferably with fresh ginger, but you will have an extraordinary plate also using this spice dried.
Below, you will find the original recipe and the translation into English, with a note about garum.
You can pair the fava beans with a beef stew, a roast Guinea fowl or simply eat them with a barley polenta.
Enjoy your meal!

Method
Peel the fava beans and boil them until they are tender.
Meanwhile, prepare the sauce. Grind in the mortar black pepper and lovage, then add the ginger peeled and minced. Mash the boiled egg yolks with the spices and add a little garum and honey, vinegar, wine, and extra virgin olive oil. Use all the ingredients in moderation, in particular, garum and honey; you can always add more later if needed.
When the fava beans are done, mash them coarsely.
Put the sauce on the fire until it starts boiling, then mix the fava beans with the sauce and serve.

Garum
Garum was a fermented fish sauce widely used in the cuisine of ancient Mediterranean. It was made with fish and salt; sometimes wine, must, and spices were added. Today, few producers of ancient food sell it. If you don’t find garum, you can substitute it with a South-East Asian fish sauce, made in the same way as some kind of ancient garum. Don’t use instead sauces too salty and fishy, as Italian colatura di alici, that can easily ruin the dish.
Remember that you can always substitute it with salt. 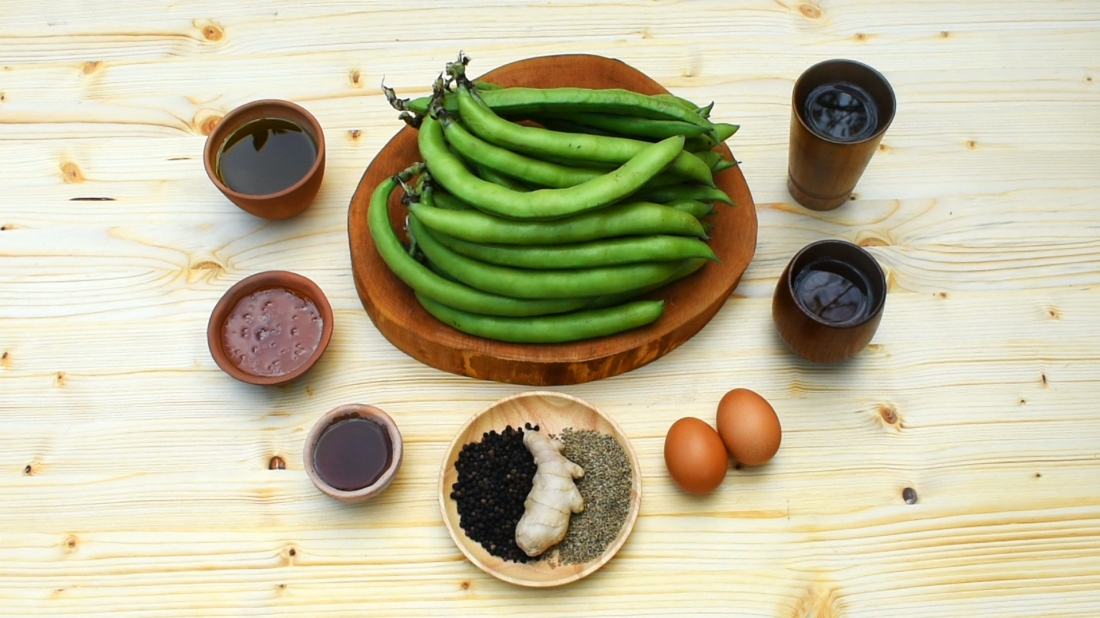 Translation
Vitellian peas or fava beans. Boil the peas and mash them. Grind black pepper, lovage, ginger, and add hard egg yolk, three ounces honey, garum, wine, and vinegar. Put the sauce in a pot with the ground spices. Pour oil and boil it. Mix the peas and the sauce, mashing them. If they are sour, add honey and serve.