Coconut appears rarely in medieval Italian cookbooks, and the recipe we will prepare today is among the few ones. Cucus, writes Pliny in the 1st century, is particularly appreciated, and Persians esteem its wood. It is available both fresh and dry. Many centuries later, in the 16th century, Mattioli, an Italian physician, writes that nuts of India are very common in all the Italian spice shops, once again, both fresh and dry. His book not only gathers information about many subjects of medical interest such as herbs, spices, and vegetables starting from ancient Greece (most of all, Dioscorides) to his contemporary age, but also collects interesting drawings.
The anonymous Tuscan writer of this recipe uses Mattioli’s term, nuts of India, in Italian noci d’India. His cookbook, called Libro della Cocina or Anonimo Toscano A (there are two different manuscripts), is mainly a translation of a Latin cookbook, Liber de Coquina, with substantial variations in the recipes. For example, this recipe is quite different from the one prepared in the Latin manuscript, in which coconut is absent.
This recipe, meant for any kind of little birds, pairs perfectly with medieval bread and pasta. We suggest, for example, to serve it with walnut bread, green ravioli, or lasagna.
Below you will find a short note about the ingredients and the original recipe with the translation into English. Enjoy!

Method
Grind the spices in the mortar, then add the coconut and pound all together. Boil an egg and spit-roast the chicken liver, then mix the egg yolk and half the liver with the spices and coconut.
Mince the lardo and let it melt in a pan. When it is hot, brown the quails on both sides and add the sauce, diluting it with water. Cook the quails for about 20 minutes and let them cool for a while, according to the suggestion of the author.
Serve them warm coated with the sauce. 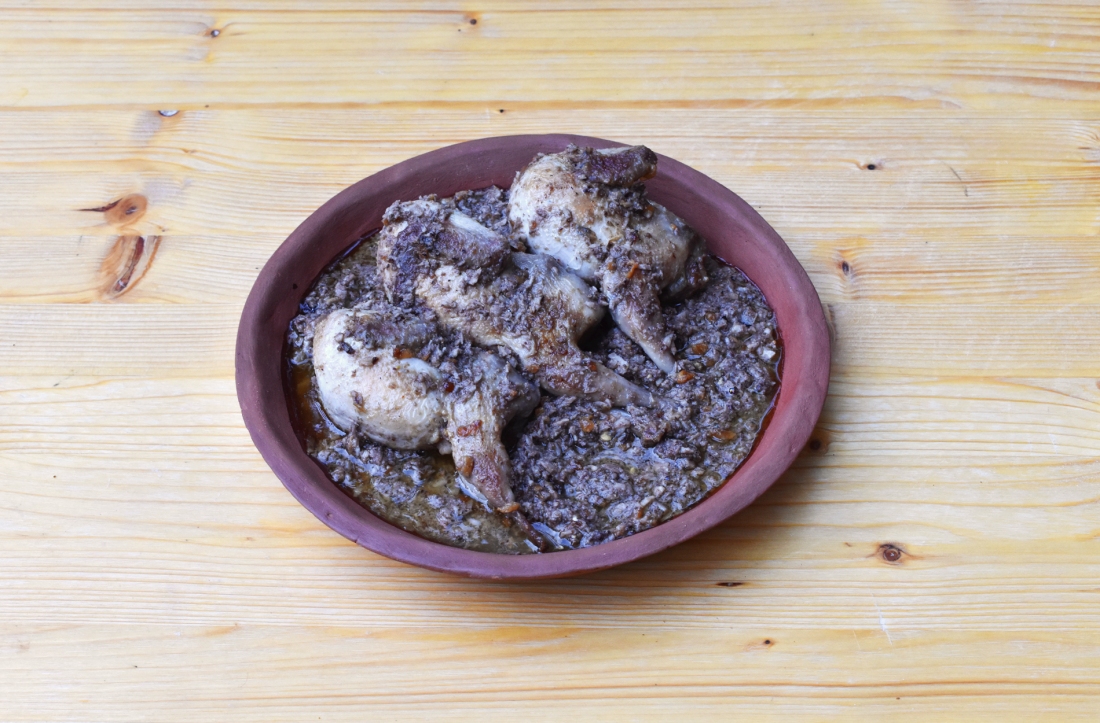 Note about the ingredients
Liver is one of the most common ingredients to prepare medieval sauces. For this recipe, you can use any kind of bird’s liver. We chose spit-roasting it, one of the most common cooking methods, but the author does not specify how to prepare it.
We used fresh coconut, but probably, as in the previous and following centuries, the medieval cook had at his disposal it both fresh and dry.
Lardo, cured pork fatback still common in Italy, was the most used cooking fat. You can substitute it with extra virgin olive oil, but in this case, add a few pinches of salt during the cooking.

Translation
Take cinnamon, cloves, nutmegs, nuts of India, livers of birds, egg yolks, and little birds, whole or in pieces. Make a soffritto with lardo, then cook them in the sauce and make as before said about hare [plate the hare pouring over the sauce, let it cool, and serve warm].