In his book about Latin language, Varro (born at the end of the 2nd century) writes that the word isicia (which he spells insicia) comes from insecta caro: minced meat. In the cookbook conventionally attributed to Marcus Gavius Apicius, the widest source of ancient Roman recipes, we find many recipes of isicia, prepared with both meat and fish. In the past months, we prepared a recipe of isicia amulata (which can be roughly translated as meatballs thickened with starch) and isicia marina (seafood cakes), as well as lucanica, a smoked sausage whose name is still used in Italian and other languages.
From the Edict of Prices of Emperor Diocletian (301 CE), we know that isicia and lucanica were also sold yet prepared, with both beef and pork meat, and the latter were more costly. The kinds of meat Apicius suggests for his isicia are peacock, pheasant, rabbit, chicken, and pork.
Today we will present a recipe of isicia omentata. Omentum is the Latin word for caul fat, an ingredient widely used in historical and traditional Italian cuisine. It is essential for a good outcome of the recipe: Apicius suggests using a lean cut of meat for the meatballs, and the omentum is the only fat used here. It will melt during the cooking, giving a pleasant moisture to the meatballs that otherwise would result too dry.
Below, you will find a note about the ingredients, the original text of the recipe with our translation into English, and the video of the recipe with captions in English and Italian. Enjoy! 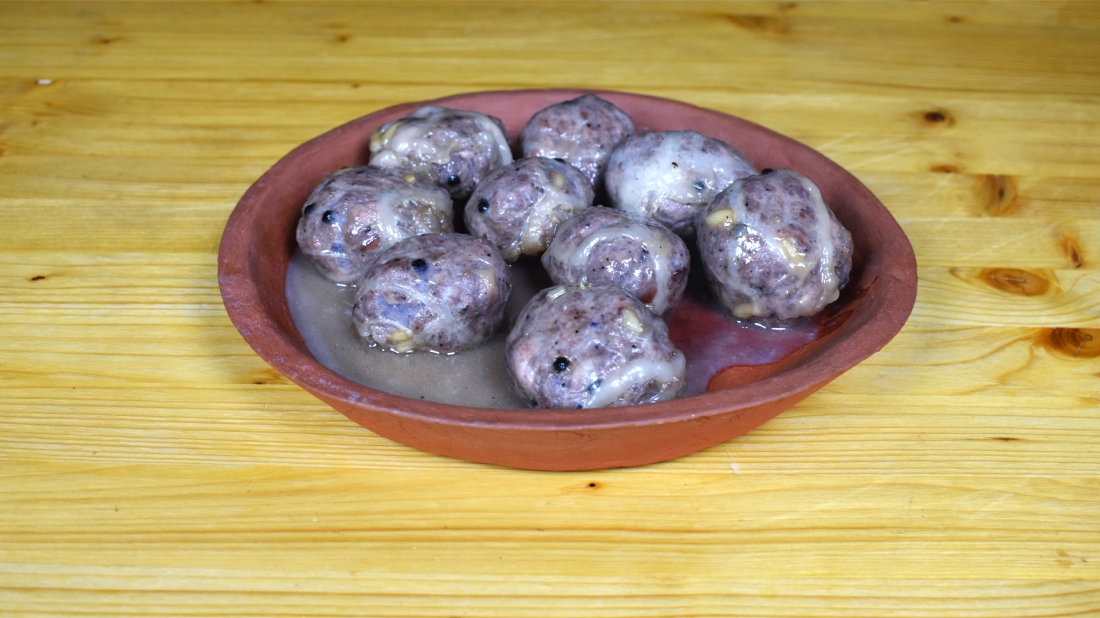 Method
Remove the crust to the bread and soak the internal part in wine. Grind the myrtle berry and a part of the black pepper, keeping aside some grains which you will add whole to the meatballs.
Mince the meat, then pound it in the mortar.
Mix the meat, spices, bread, and a little quantity of garum. If you do not use garum, for this quantity of meat, we suggest adding a couple of pinches of salt instead.
Add whole black pepper grains and pine nuts.
Cut the caul fat in little square pieces. Shape little meatballs, wrapping them in the caul fat.
Pound the grapes in the mortar paying attention not to crush too many seeds and strain the juice.
Boil the grape juice until it reduces to a third of the original volume, then add the meatballs and cook them for a few minutes. If the juice reduces excessively, add a bit of water to prevent it from caramelizing.
Serve the meatballs coated with their juice.

Note about the ingredients
Myrtle berries were widely used in ancient Roman cuisine, as a seasoning as well as ingredients to prepare some kinds of wine and oil, described in detail by Cato, Columella, and Palladius. According to Pliny, before the introduction of pepper, myrtle berries were used for the sauces, in particular to season boar meat. In Italy, they are still used, in particular in Sardinia, to prepare sausages and other traditional dishes as well as a liquor, but otherwise their use is almost forgotten. If you do not find the berries, you can use the leaves instead. Soak them in the wine needed for the bread at least for a night, then remove the leaves and use it.
Apicius does not specify what kind of meat to use. He uses the term pulpa, which means lean meat. The author specifies to shape pusilla isicia: little meatballs.
Caroenum was one of the three grape-must preserves that ancient Romans used for their recipes, as sapa and defrutum. According to Palladius, it was made boiling the grape juices until it reduced to the two-thirds of the original volume, while sapa was made reducing it to one-third and the defrutum to a half.
This is one of the rare cases in which Apicius specifies that garum is optional. Made with fish and salt fermented together, sometimes adding spices and aromatic herbs, garum was an ancient Mediterranean sauce widely used by Romans, Greek, and Phoenicians. The method of preparation was identical to modern-day South-East Asian fish sauces, so you can substitute it with one of these sauces or with salt.

Translation
Isicia omentata: pound minced lean meat with crustless bread soaked in wine. Pound with pepper, garum (if you want), and myrtle berry after having removed the seeds. Shape little meatballs, placing inside pine nuts and pepper. Wrap in caul fat and cook with caroenum.