De Agri Cultura by Cato, written in the 2nd century BCE, is an extraordinary source of information about the management of the villa, the ancient Roman farm, as well as farming and breeding. The most important part for us, however, is the one dedicated to the recipes. Cato writes the method to prepare simple food whose recipe would be otherwise lost: bread, sweets, cheesecakes, preserves. In the past months, we prepared a few recipes from this book: libum, a savory cheesecake baked as an offering to the gods; epityrum, cured olives seasoned with herbs and spices; placenta, a layered sweet cheesecake originally Greek; mustacei, delicious bread rolls leavened with fresh grape must.
This time, we prepare another sweet cheesecake, completely different from placenta, called savillum: a soft dessert meant to be eaten with the spoon.
Below, you will find the original text with our translation, a note about method and ingredients, and the video of the recipe with subtitles in English and Italian. Enjoy! 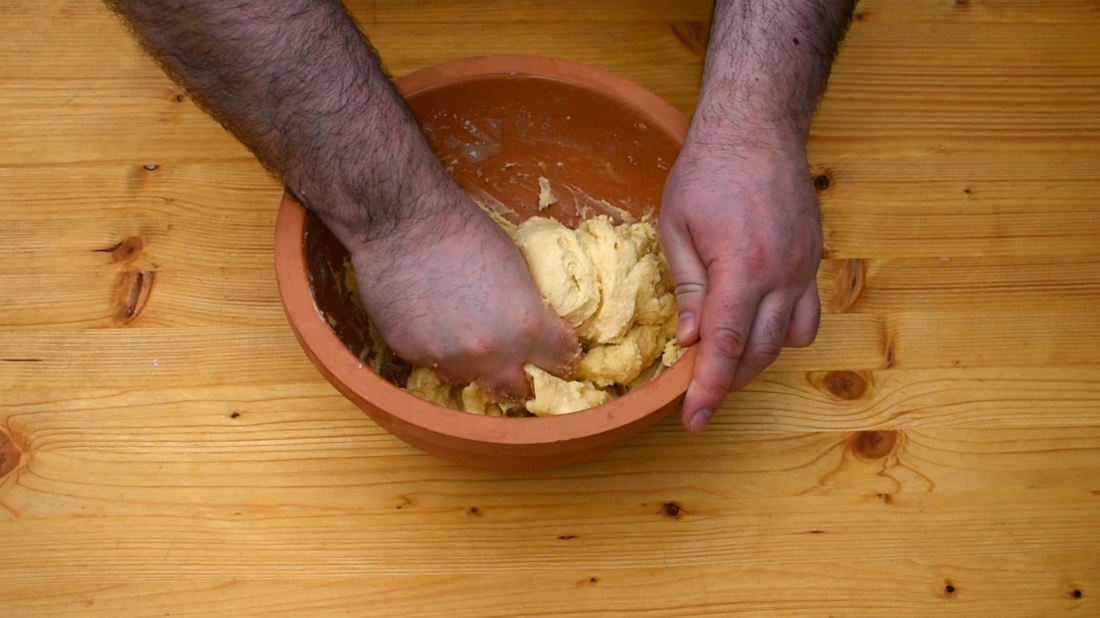 Note about method and ingredients
For a better outcome, we suggest using fresh cheese. Cato does not specify which kind to choose, but this sweet is meant to be served with the spoon, so a fresh cheese not too salty is a good choice. Ancient Romans prepared cow, goat, and sheep cheese, as described by the agronomists, in particular Columella and Varro.
We suggest paying attention to keep the ratio, in particular between cheese and flour, to obtain a soft cake. We reduced the amount of ingredients, but you find the original quantities below.
Cato does not write which kind of flour to use: the term he uses, farina, is generic. Usually, it refers to white wheat flour, the most used by Cato and the other ancient authors. The second most used in the Antiquity, as confirmed also by Pliny and Galen, is barley flour.
White poppy seeds were used to coat the bread and, covered with honey, as sweets, writes Pliny. We prepared a few months ago a bread from Pliny’s Naturalis Historia with white poppy, nigella, and celery seeds.
We used our hand-made clay testum to cook the savillum. It is a sort of portable oven, one of the favorite Cato’s cooking vessels for bread and cheesecakes.

Translation
Prepare the savillum in this way. Mix half a pound of flour and two and a half pounds of cheese to obtain a consistency similar to libum, then one-fourth pound of honey and one egg. Grease a clay cooking vessel with oil. When you have kneaded well the ingredients, place the cake in the vessel and cover with the testum. Pay attention that it cooks well in the middle, where is it thickest. Once it is cooked, remove the vessel, coat the cake with honey, sprinkling with poppy seeds, and cook it under the testum for short time, then remove from the fire. Serve in its cooking vessel with a spoon.