In an ancient Roman banquet, usually, sea fish was never lacking. While freshwater fish was less priced, sea fish – either caught or bred in the piscinae – was often expensive, a status symbol for the richest Romans. Tunas and other kinds of oily fish were frequently served for dinner and lunch, as we can read in the works of authors like Martial and Horace, sometimes paired with boiled eggs and seasoned with rue.
This is one of the many fish recipes written in the cookbook attributed to Marcus Gavius Apicius, and it is called ius in cordula assa, that means sauce for roasted bonito, one of the many tuna-like fishes widely used in the Antiquity. For this recipe, you can use any kind of oily fish, included sardines as Apicius suggests and tuna.
Below, you will find a note about the ingredients and the original recipe with the translation into English. Enjoy! 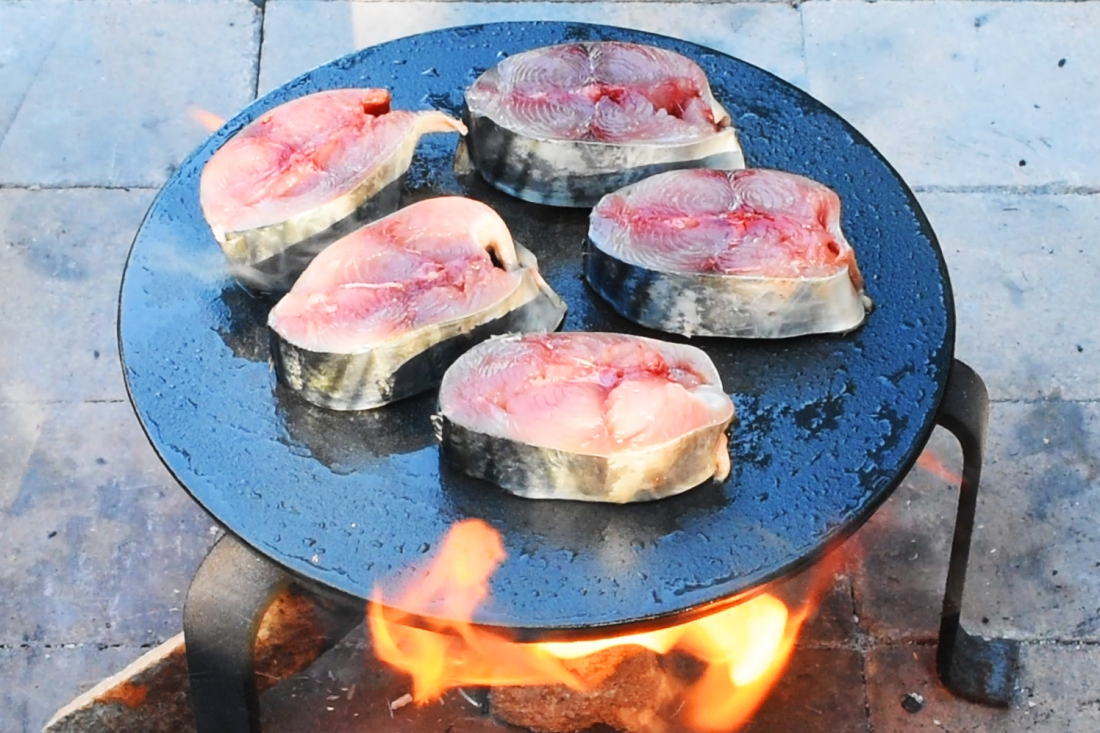 Method
Grind in the mortar celery seeds, lovage, and white pepper. We suggest using mainly pepper, because the flavors of celery seed and lovage are so strong that can easily overpower the sauce. Mince the fresh herbs and one date, then add them in the mortar and grind with the spices to obtain a paste. Add a little bit of honey, vinegar, wine, and olive oil, mixing the ingredients together.
When the sauce is ready, gut the bonito, then cut it into thick slices. Cook on the griddle, searing for a minute on each side.
Serve the fish coated with the sauce.

Note about the ingredients
Rue was one of the most common aromatic herbs in ancient Roman cuisine. Its flavor, intense and slightly bitter, can easily overpower the other ingredients. We suggest using a little quantity, in this case, more mint than rue. In Italy, rue grows spontaneously in many regions, but it is difficult to buy. We grow a few plants in our aromatic herbs garden. If you don’t find rue, you can substitute it with other fresh herbs, for example, parsley, oregano or young celery tops, or just use mint.
The author doesn’s specify what kind of pepper we have to use for this recipe. Pliny, in his Naturalis Historia, writes that all the three varieties of pepper – long, black, and white – were available at his times. The prices were very different: the most expensive was the long pepper, followed by the white and the black ones. We chose for this recipe white pepper, but you can use the kind you prefer.