Mustard was one of the most common sauces in ancient Rome. Used also alone, it appears as an ingredient for more complex recipes in the cookbook attributed to Marcus Gavius Apicius, De Re Coquinaria, who doesn’t give us his own method. We chose using the recipes of Palladius and Columella, quite different but both interesting, to prepare the mustards we served with the lucanica, an ancient Roman smoked sausage.
Almost four centuries separate the two authors, a testimony of the popularity of this sauce that, throught the centuries, is widely used still today. Columella (1st century) and Palladius (4th century), both agronomists, are fundamental sources not only for the agriculture and farming, but also for the many recipes of preserves, sauces, alcoholic beverages, cheese, honey, oil they wrote in their treatises. Differently from Apicius, who writes recipes for rich banquets, Columella and Palladius’ methods are simpler and meant also for farmers and common people.
Below, you will find a note about the ingredients and the original recipes with the translation into English.
You can pair this mustards not only with smoked sausages, but also with other meat dishes such as guinea fowl or roast chicken. Enjoy!

COLUMELLA’S RECIPE
The author suggests two versions of this recipe: one, simpler, without pine nuts and starch for the common meals; the second, which we are preparing here, meant for banquets.
Columella uses saltpeter, a quite common ingredient for preserves well known by ancient Romans. For the dilution in water, we suggest following the directions on the label.

Method
Soak the mustard seeds in water for a couple of hours, then grind them in the mortar. Flatten the mustard paste, then make a few holes with your fingers for placing inside hot charcoals. Pour the saltpeter diluted in water, discard the water, and remove the charcoals. Now, you can add the pine nuts and the starch, grinding anything together to reach a smooth consistency. Put the sauce on the fire. When it is thickened, the mustard is ready.

Translation
Clean and sift diligently the mustard seeds, then wash them with cool water and, when it is well washed, soak them in water for two hours. After taking them off, squeeze the seeds with you hands and put them in the mortar, new or well cleaned, and grind with the pestle. When they are ground, gather the paste in the middle of the mortar and flatten it with your opened hand; then make holes and place inside hot charcoals. Pour water with saltpeter to remove the bitterness and the yellow color from the mustard. Lift the mortar to pour off the water. Add white, strong vinegar, mix with the pestle, and strain it. This is an excellent sauce for the turnips.
To prepare the sauce for the banquets, after having cleaned out the mustard, add well-ground, fresh pine nuts and starch, pouring vinegar. The other steps are the same as above. This kind of mustard not only is useful for the sauces, but it is also beautiful: if well made, it is colored with a fine white. 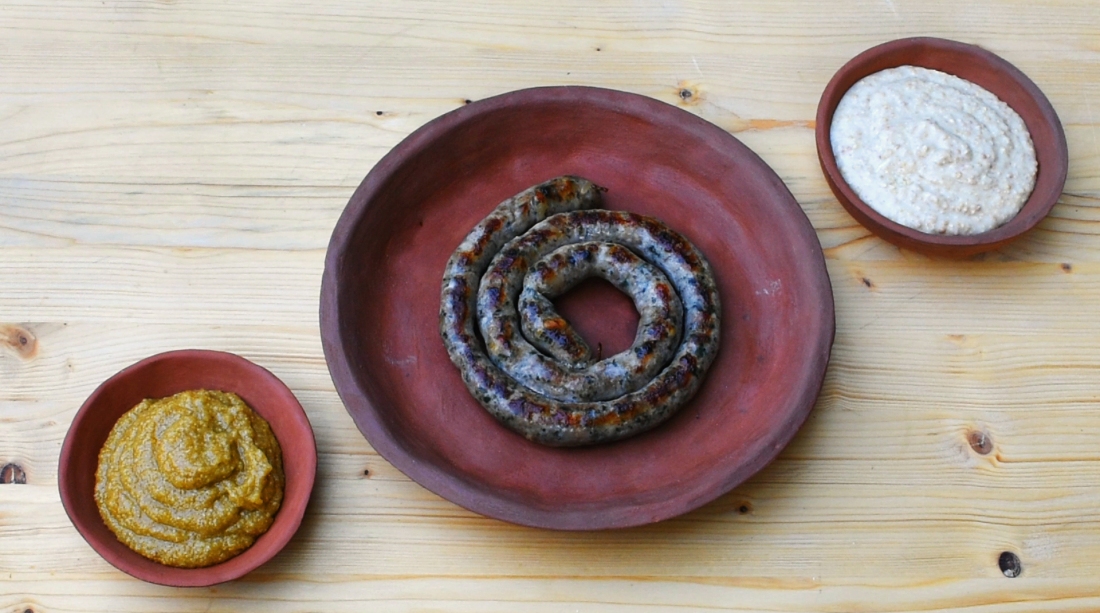 PALLADIUS’ RECIPE
This is a recipe for a sweet mustard. We changed a bit the ratio of the ingredients, and we suggest doing the same according to your taste. 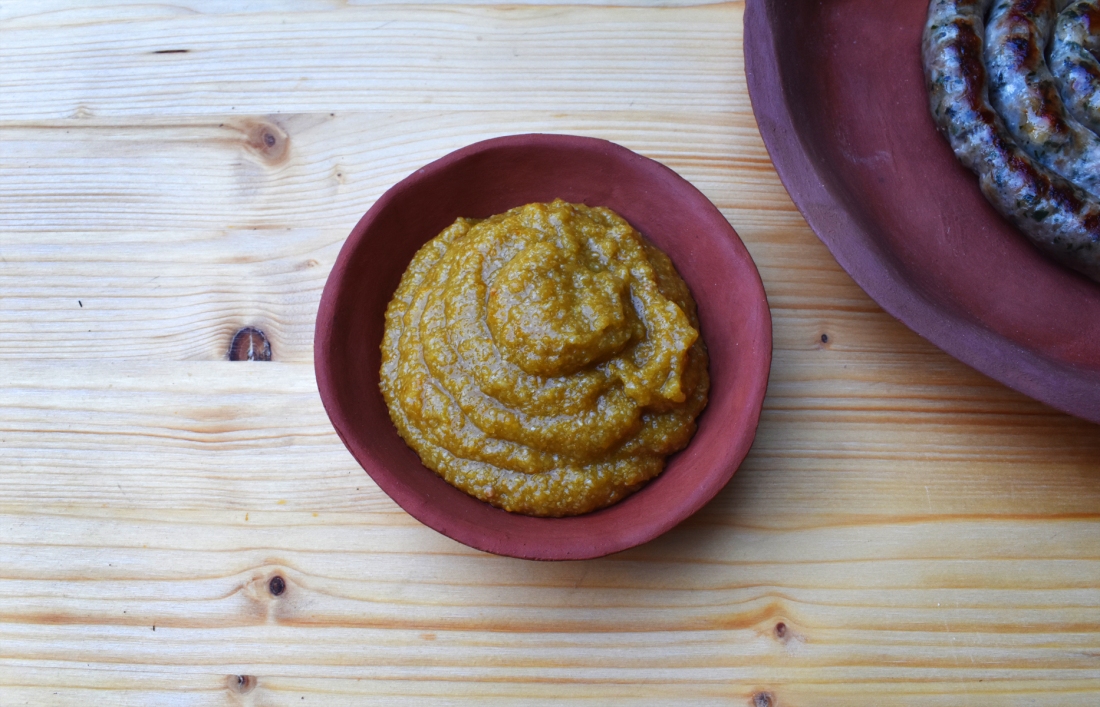 Method
Grind the mustard seeds in the mortar, then add white wine vinegar, honey, and olive oil. Mix well everything and serve.

Translation
Grind one sextarium of mustard seeds with five pounds of honey and one of Hispanic oil, diluting with one sextarium of strong vinegar. Grind diligently everything together and use.