Last days in Italy had been really hot, so we decided to prepare a recipe we found perfect for the summer: lobster served with a delicious sauce prepared with pine nuts, spices, and fresh herbs from our garden. We selected this recipe from the cookbook attributed to Marcus Gavius Apicius, the most famous cook of Ancient Rome. There are seven lobster recipes in this source. The term used by Apicius is lucusta, that during the Middle Ages and Renaissance changed into langusta, lagusta, or ragusta, words similar to the modern-day Italian aragosta.
As you can see, for this recipe we used an American lobster. It is not a philological choice, but it is the only one available in the little country amid the hills where we are living. You can use any kind of lobster or, if you prefer, other crustaceans to prepare this delicious dish, an amazing way to experience how ancient Romans tasted the flavors of the sea.
Below, you find a note about the ingredients, the original recipe, and our translation into English. Enjoy your meal!

Method
Dispatch and simmer the lobster. The cooking time depends on the size of the lobster; ours needed less than ten minutes.
For preparing the sauce, pound white pepper, cumin, and lovage in the mortar, then add finely minced mint and rue. Pour white wine, vinegar, a little quantity of honey and garum, aiming at a sauce not too thick. Mix well all the ingredients together.
When the lobster is cooked, serve it with the sauce aside. 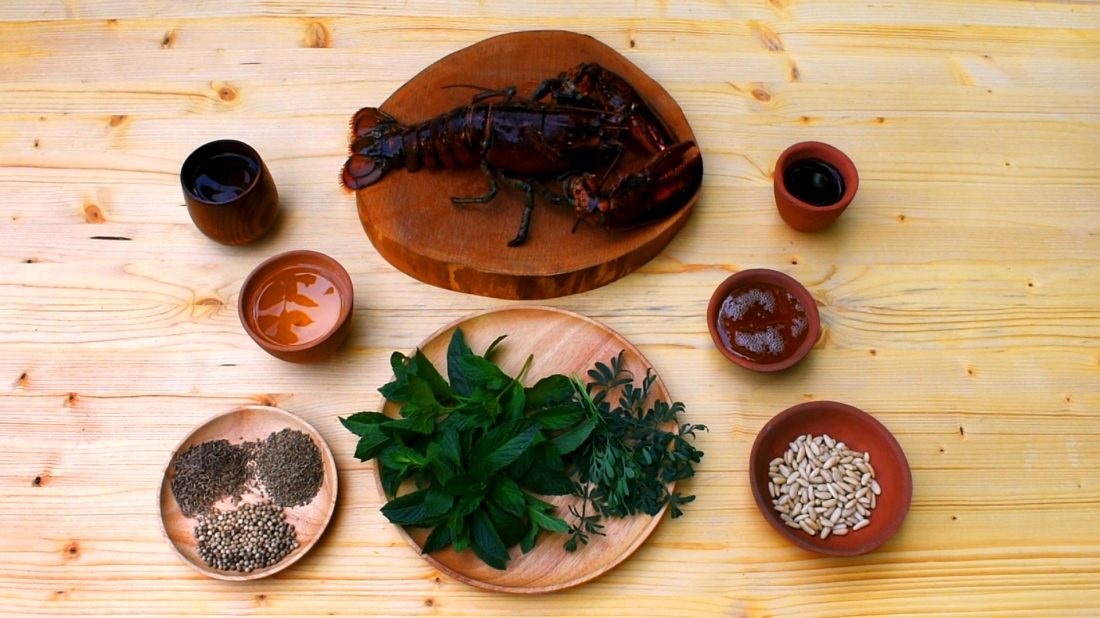 Note about the ingredients
Rue is an aromatic herb widely used in ancient Rome, generally for the sauces. It grows spontaneously in many Italian regions and it is still used here to aromatize grappa, roasts, and other dishes. We suggest using just a few leaves: its strong flavor can easily overpower the dish. It may be difficult to buy, so we cultivate a few plants in our garden. You can substitute it with mint, parsley, cilantro, and other aromatic herbs.
Garum was an ancient Mediterranean fish sauce, prepared with fish fermented with salt and sometimes herbs and spices. Today there are few producers of garum. If you don’t find garum, you can substitute it with a South-East Asian fish sauce, prepared in the same way as some kinds of garum, or just with salt.
We chose using white pepper, appreciated by ancient Romans, because we considered it perfect for the lobster, but you can choose also black or long pepper.
Remember that balance and moderation are fundamental in Apicius’ cooking: use a little of any ingredient and you will obtain a delicious dish. Don’t exceed and taste frequently the sauce before adding more ingredients, in particular, garum and honey.