Today we prepare an early medieval recipe from the Excerpta Vinidarii, a source attributed to the Goth cook Vinidarius and preserved in a manuscript of De Re Coquinaria, Marcus Gavius Apicius’ cookbook. Vinidarius’ cuisine shows similarities to Apicius’, in particular some ingredients (for example, garum, asafoetida, rue, and other herbs) and methods.
This delicious fried fish plate, full of flavors with herbs and spices, will make you experience the connection between the ancient Roman and early medieval cooking.
Below you will find the original recipe and the translation into English, with a note about the ingredients. Enjoy!

Method
To prepare the sauce, grind black pepper and coriander seeds in the mortar, then add one date cut in pieces and mince finely oregano and rue. Mash the grapes to obtain the juice and boil it until it is reduced by a third. Now, mix the juice, called defrutum, to the ingredients and add extra virgin olive oil, vinegar, garum, and a little grated asafoetida. Boil the sauce just for thirty seconds.
Scale and gut the fish, then deep fry it in oil.
Serve the fish coated with the sauce, adding ground black pepper.

Note about the text and the ingredients
The author recommends this recipe for any kind of fish. We used extra virgin olive oil for deep frying it, the most philological for this historical period, but you can choose other oils with a higher smoking point.
Rue is one of the most used fresh herbs in ancient Roman and early medieval cuisine. In many countries it is difficult to buy, so we suggest growing it in a vase. If you don’t find it, you can use other fresh herbs instead, such as mint, cilantro, or parsley.
Defrutum, also spelled defritum, is must reduced by a third. It was a common sweetener in Ancient Rome and during the early Middle Ages. The most common kind of reduced must, called sapa, was used in Italy until the 19th century.
The author uses for this recipe root of laser, and we substituted it with the resin, asafoetida. It was one of the most used spices in the ancient Mediterranean, and we find it in Roman and Greeks cuisine sources. It was known with the Latin name laser or with the Greek name silphium. The most prized variety, called laser Cyrenaicum, is no longer produced today, but the eastern variety, called laser Parthicum, is still used in many countries.
Garum was a fermented fish sauce widely used in the ancient Mediterranean. It was produced the same way as some kind of modern-day South-East Asian fish sauces. You can substitute garum with them or use salt instead. 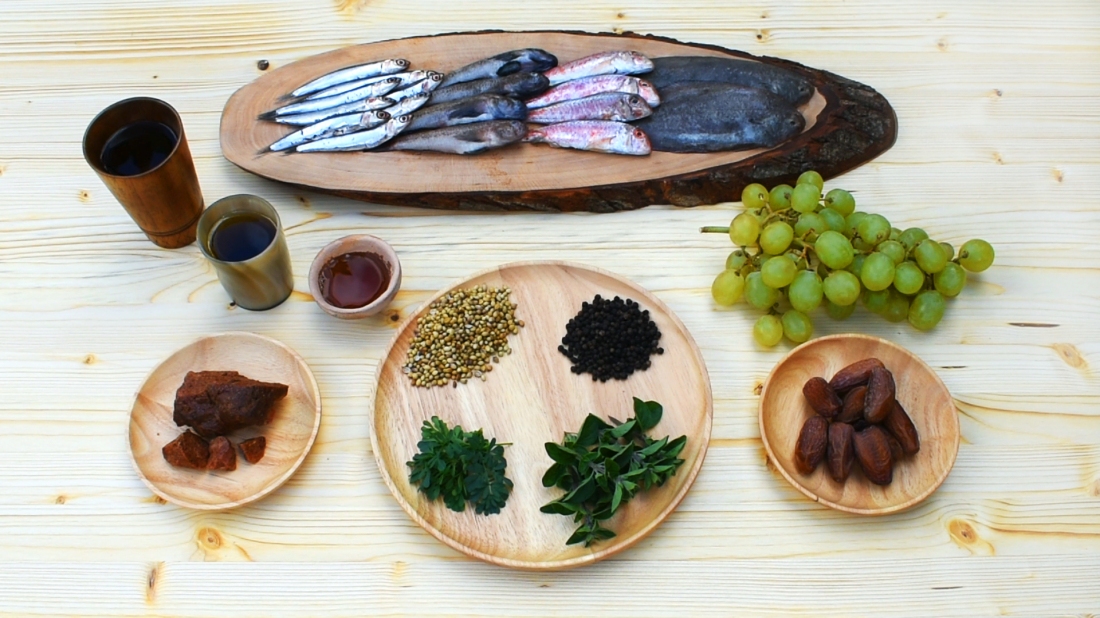 Translation
Prepare this way any kind of fried fish. Grind black pepper, coriander seeds, root of laser, oregano, rue, one date. Pour vinegar, oil, and garum; add defritum. Mix all together and put in a pan to cook. As soon as it boils, coat the fish with this sauce. Serve sprinkled with black pepper.