One of the oldest medieval books on cooking outside Europe (where, instead, we find some Byzantine books written in Greek or Latin like Anthimus’ De Observatione Ciborum in addition to Vinidarius’ Excerpta) is a fascinating book written in Baghdad, titled Kitāb al-Tabikh by Abu Muhammad al-Muthaffar ibn Nasr ibn Sayyār al–Warrāq and dating back to the 10th century. We used the translation by Nawal Nasrallah, titled Annals of the Caliphs’ Kitchens.
This source is a massive work that collects 132 chapters in which we find more than 600 recipes, poems on food, recommendations for the good manners at the table (for example, how to behave in the presence of a superior or a king), recipes for alcoholic and non-alcoholic beverages (among which fuqqā, a kind of ale, mead, date wine, and raisin wine), recipes for the sick, as well as suggestions for the cook (for example, how to perfume the pots or which utensils to use). A few chapters of this book are dedicated to the humoral proprieties of the various foods and beverages and to dietetic recommendations. We also find recipes to prepare powders for cleaning the hands and a chapter dedicated to sleep.
The recipe we are presenting today is a simple and delicious rice cream aromatized with saffron, called Muhallabiyya. The method is described in detail: the rice must be washed and placed on a cloth overnight to dry, then crushed to obtain flour. After that, we have to bring the milk to a boil, adding the rice flour and stirring all the time to prevent it from sticking. When it is cooked, we pour clarified butter or walnut oil on the cream, with white cane sugar. We must use 1 ½ raṭls (translated as 1 ½ pound) of rice for 10 raṭls of milk. If we want to obtain a yellow cream, we have to add saffron.
We chose the yellow variant and decided to use brown sugar instead of white sugar to give more flavor to this cream. Both kinds of sugar appear in this cookbook and brown sugar is suggested in another passage of this book if the cook does not have at his disposal white sugar. The quantity of cream is up to you: the only thing that is important to keep in mind is the ratio recommended between milk and rice flour, whereas the other ingredients, the clarified butter or walnut oil as well as the sugar and saffron are irrelevant to a good outcome of the recipe, clearly, if you use them in moderation.
It is important to avoid adding too much water with the saffron not to ruin the consistency of the cream.

To know more about medieval cooking in Europe, check out our books Registrum Coquine. A medieval cookbook (15th century) and De Observatione Ciborum. Early medieval recipes at the court of the Franks, written in the 6th century by the physician Anthimus to the king of the Franks Theuderic. This book contains some of the earliest medieval recipes, in addition to information about the diet of the Franks and the differences between their food habits and the alimentation of the Mediterranean populations, showing the passage between ancient and late-medieval cooking.
For more information about ancient food, we recommend reading Ancient Roman Cooking. Ingredients, Recipes, Sources and check out our Patreon page, in which you find several articles about historical food and the translations of ancient and medieval sources.
To support our work, you can buy us a beer or purchase our merchandise.

Method
Steep the saffron in a bit of warm water and grind the sugar in the mortar. Warm the milk at low heat. As soon as it starts boiling, add the rice flour a bit at a time, stirring all the time. Continue cooking for about 10 minutes. When the cream is completely cooked, add two tablespoons of clarified butter and the saffron. Stir and serve dusting with sugar. 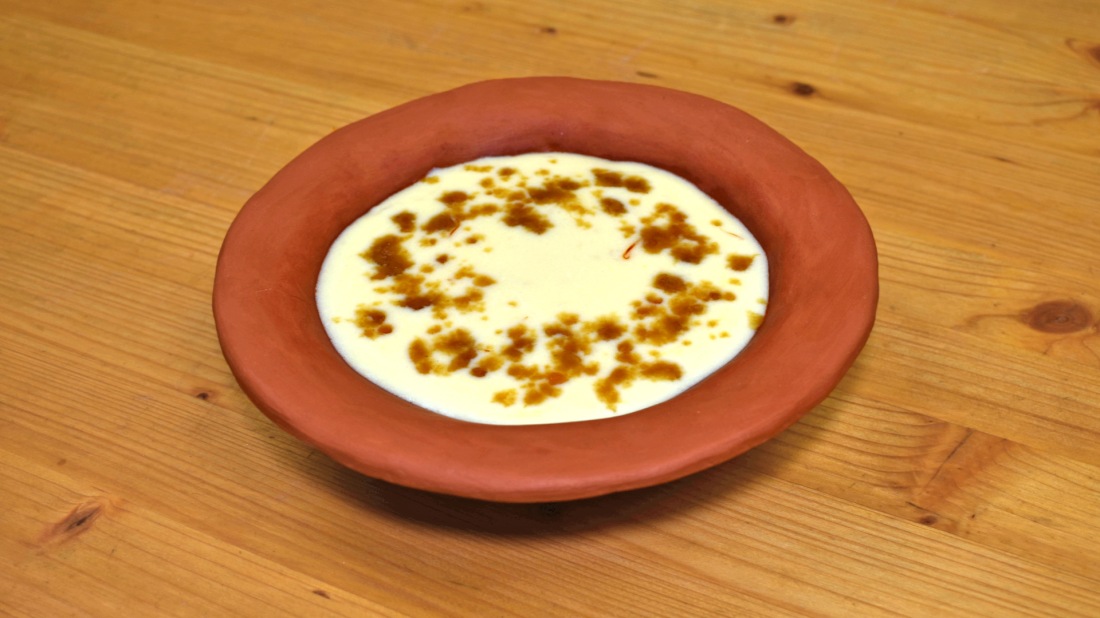