There are a few recipes of isicia marina in De Re Coquinaria, the cookbook conventionally attributed to Apicius. Isicia is a term that refers to minced meat or seafood shaped to form meatballs or cakes. In the past, we prepared cuttlefish cakes, similar to the ones we are making today, isicia omentata, and isicia amulata; in addition, we recently made an interesting plate with ancient pasta and meatballs called Minutal Terentinum.
This week, we are preparing a plate perfect as a main dish for summer, spicy and fresh: shrimp cakes paired with an aromatic cucumber salad. If you prefer, you can use different kinds of seafood. The author of this recipe lists among the ingredients for isicia marina lobster, cammari or scillae (these terms refer to different species of crustaceans such as shrimps, prawn, crawfish, and scyllarus arctus), cuttlefish, calamari. The method is very simple, but the choice of the spices enhances the natural sapidity of the seafood in an extraordinary way.
Below, you find the methods and the original texts with our translations, a note about the ingredients, and the video of the recipes with subtitles in English and Italian. Enjoy!

Method
Grind the pepper in the mortar. Clean the shrimps and remove their heads, then pound them well in the mortar, mixing with a pinch of pepper and a little garum. Shape 5-6 cakes with the shrimp paste. Grind in the mortar pepper, lovage, and cumin. Oil a griddle and cook the cakes about 30 seconds for each side, then plate and sprinkle with the spices, grating a bit of asafoetida. 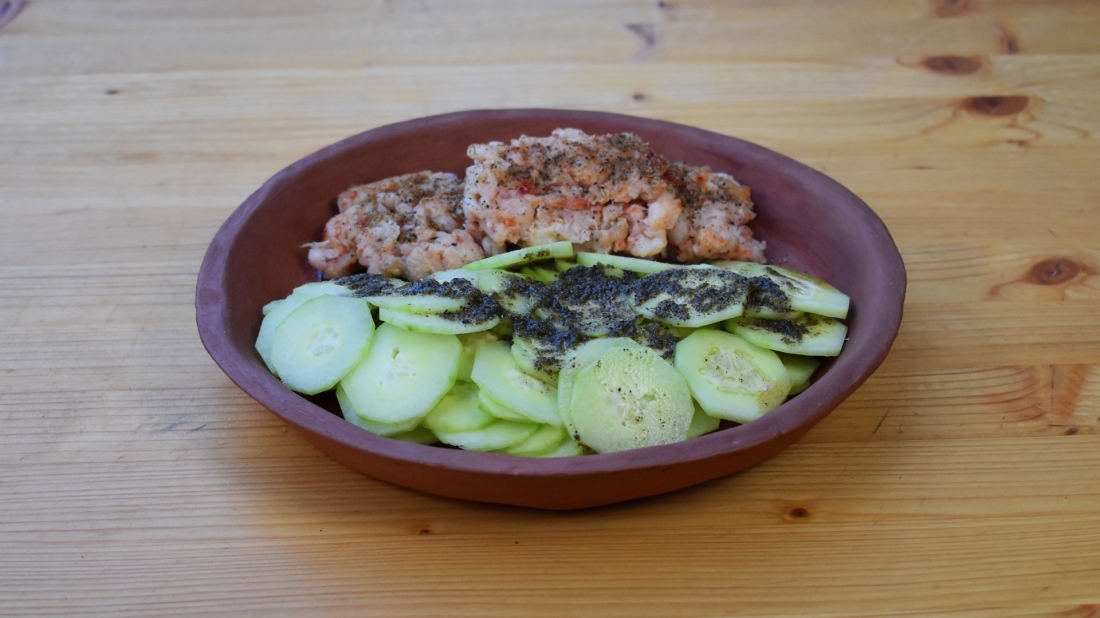 Note about the method and ingredients
Some kinds of shrimps are quite hard to shape as cakes, even if pounded for a very long time, and these can easily fall apart. If you notice that the cakes do not hold their form, add a beaten egg white or a bit of wheat starch. We suggest shaping cakes flat and not excessively big to prevent them from breaking during the cooking.
Garum was an ancient Mediterranean fish sauce prepared in the same way as the traditional South-East Asian fish sauces, the best substitute if you do not have garum. As an alternative not to ruin the dish, use a pinch of salt.
Lovage is a Mediterranean spice very common in this cookbook. The flavor of its seeds, the part traditionally used in historical Italian cuisine, is intense and mixed with pepper, turns out quite spicy. We suggest using a little quantity not to overpower the dish. If you do not have it, you can use a few anise seeds or skip this ingredient.
Asafoetida is one of the most important spices for Greek and Roman cuisine. It is a resin extracted from a plant similar to fennel and its flavor is intensely aromatic, recalling of garlic. In the ancient world, there were both asafoetida, called laser or silphium Parthicum, and laser Cyrenaicum, but the latter is no longer produced and was a rare spice even in the 1st century. In this recipe, the author uses the root of laser, an ingredient not available today, We substituted it with the resin.

Translation
Isicia marina are made with shrimps and lobster, calamari, cuttlefish. Season the isicia with pepper, lovage, cumin, and root of laser.
Isicia made with scyllarus arctus or big shrimps: remove the head from the crustaceans and pound them in the mortar with pepper and excellent garum. Shape the isicia with their pulp.

Method
Clean and peel the cucumbers, then slice them. Mince finely the pennyroyal and pound it in the mortar with the black pepper. Add a little honey, garum, and vinegar, mixing all the ingredients. Plate the sliced cucumbers dressing with the sauce and grating a bit of asafoetida.

Note about the ingredients
The author does not specify in this recipe to peel the cucumbers, but this is the method he recommends for the other cucumber recipes.
Pennyroyal is the only aromatic herb used for this recipe. It is a herb that grows wild in many Italian regions and it is quite common in Italian cuisine, both historical and traditional. Its flavor recalls of mint, just intenser and quite bitter. If you do not have it, use mint instead.