In the cookbook conventionally attributed to Apicius, De Re Coquinaria, there are a few recipes of desserts, called dulcia domestica: homemade sweets. Desserts were served as secundae mensae, in the same way as we do today: at the end of the meal. We know from other authors, for example Petronius and Martial, that usually sweets were prepared by the pistores, the bakers, a role different from the cooks’. This is probably one of the reasons why the sweets we find in Apicius’ book are simple and quick to prepare, as the stuffed dates we made in the past.
More complex sweets, such as placenta or savillum, were not part of the dishes prepared by the cooks. However, we find a few recipes in Cato’s De Agri Cultura who reports the methods to make these sweets, at least, a 2nd-century BCE version of them. The name of the recipe we are preparing today, ova spongia ex lacte, means spongy eggs made with milk. It is really simple to make, but it is important keeping the ratio (this is one of the few cases in which Apicius is specific about the quantities) and choosing an excellent honey, the most important ingredient for a good outcome of the recipe. Ancient Romans, Columella writes, loved in particular savory, thyme, oregano, and rosemary honey.
The author does not specify which kind of milk or pepper to choose. Romans used cow, sheep, and goat milk, as well as black, white, and long pepper. We suggest using goat or cow milk and black pepper for a good balance among the flavors.
Below, you find the original text and our translation, with the video of the recipe subtitled in English and Italian. Enjoy! 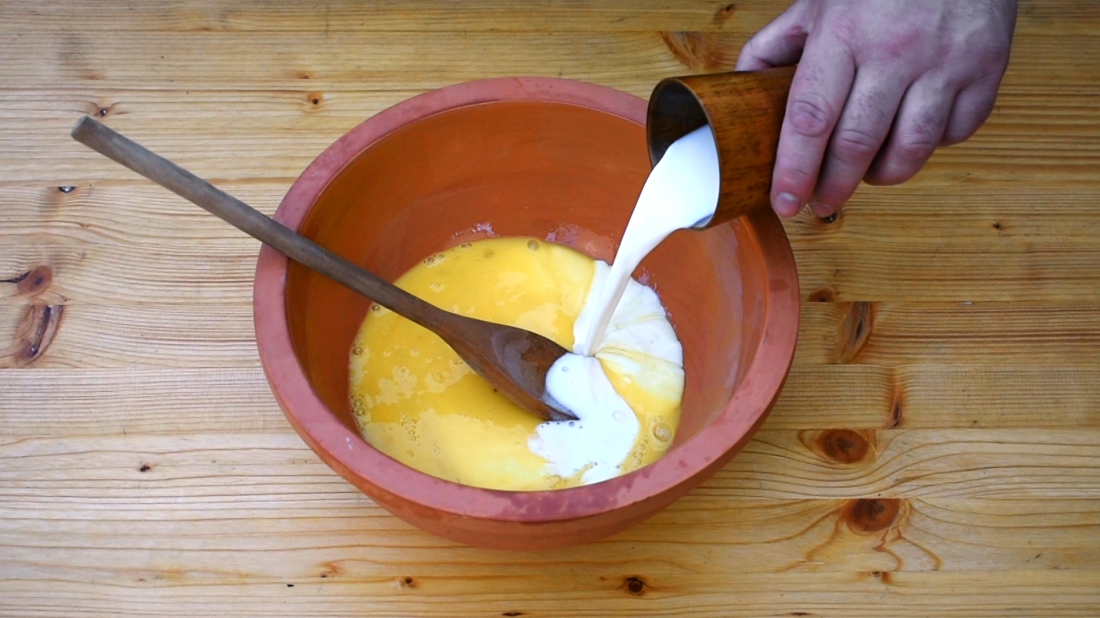 Method
Beat well the eggs and mix with the milk and a bit of olive oil.
Pour olive oil in a pan. When it is hot, add a ladle of the egg mixture. Cook the ova spongia until they are done, without turning them.
Plate the omelettes coating them with honey and dusting with ground pepper.

Translation
Spongy eggs made with milk: four eggs, one hemina of milk, one ounce of olive oil. Mix together until you will obtain a homogeneous liquid. Add a little oil in a thin pan and make it fry. Add the mixture that you prepared before. When a part of them will be cooked, plate pouring over honey, dust with pepper, and serve.